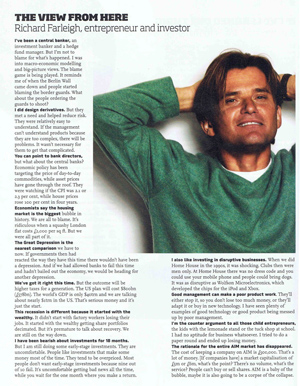 Richard Farleigh: “I’ve been a central banker, an investment banker and a hedge fund manager. But I’m not to blame for what’s happened. I was into macro-economic modelling and big-picture views. The blame game is being played. It reminds me of when the Berlin Wall came down and people started blaming the border guards. What about the people ordering the guards to shoot?

I did design derivatives. But they met a need and helped reduce risk. They were relatively easy to understand. If the management can’t understand products because they are too complex, there will be problems. It wasn’t necessary for them to get that complicated.

You can point to bank directors, but what about the central banks? Economic policy has been targeting the price of day-to-day commodities, while asset prices have gone through the roof.

Economists say the housing market is the biggest bubble in history. We are all to blame. It’s ridiculous when a squashy London flat costs £2,000 per sq ft. But we were all part of it.

The Great Depression is the nearest comparison we have to now. If governments then had reacted the way they have this time there wouldn’t have been a depression. And if we had allowed banks to fail this time and hadn’t bailed out the economy, we would be heading for another depression.

We’ve got it right this time. But the outcome will be higher taxes for a generation. The US plan will cost $8oobn (£578bn). The world’s GDP is only $40trn and we are talking about nearly $1trn in the US. That’s serious money and it’s just the start.

I also like investing in disruptive businesses. When we did Home House in the 1990s, it was shocking. Clubs then were men only. At Home House there was no dress code and you could use your mobile phone and people could bring dogs. It was as disruptive as Wolfson Microelectronics, which developed the chips for the iPod and Xbox.

Good management can make a poor product work. They’ll either stop it, so you don’t lose too much money, or they’ll adapt it or buy in new technology. I have seen plenty of examples of good technology or good product being messed up by poor management.

I’m the counter argument to all those child entrepreneurs, the kids with the lemonade stand or the tuck shop at school. I had no aptitude for business whatsoever. I tried to do a paper round and ended up losing money.

The rationale for the entire AIM market has disappeared. The cost of keeping a company on AIM is £500,000. That’s a lot of money. [If companies have] a market capitalisation of £5m or £6m, what’s the point? There’s no volume, what’s the service? People can’t buy or sell shares. AIM is a baby of the bubble, maybe it is also going to be a corpse of the collapse.”